This time last week I was on my way to a blogger dinner at The Little Yellow Door, a new Notting Hill pop-up that promised a house party vibe without – presumably – the possibility of Blink 182 coming on, or the constant threat of your parents coming home from the pub and force-feeding everyone orange juice to ‘sober them up’. (True story. My teenage years were a farce.)

I must have walked past in dozens of times, but I’d never even clocked the, er, little yellow door until the night I was looking for it. Whereas most of London’s ‘secret’ bars lie behind Smeg fridges (The Major of Scaredy Cat Town, Shoreditch) and sex shops (La Bodega Negra, Soho), TLYD is hiding in plain sight just a few steps from Notting Hill Gate tube.

Fortunately, they’d parked a doorman outside on this occasion, who looked a little out of place in front of the shuttered down phone store and a shop selling Kate Middleton tea towels.

Once inside though – up a very, very steep staircase – I found myself in a Narnia of nostalgia. There was weird art on the walls, and punch. (Except this punch was actually nice and served in an enormous silver punchbowl, rather than, you know, made from Iceland-brand Lambrini knockoff and ladled out of the bath.)

You could spend a couple of hours exploring the large living room alone, taking in all the weird shit the flatmates (only two of whom actually live upstairs above the bar) have decorated the place with. It’s fun but not contrived; dirty magazines are strewn about with drinks menus inside waiting to be discovered, the ladies’ lavatory is stocked with tampons and hairspray, and the gents’…well, let’s just say it’s always nice to have something nice to look at when you’re taking a leak. 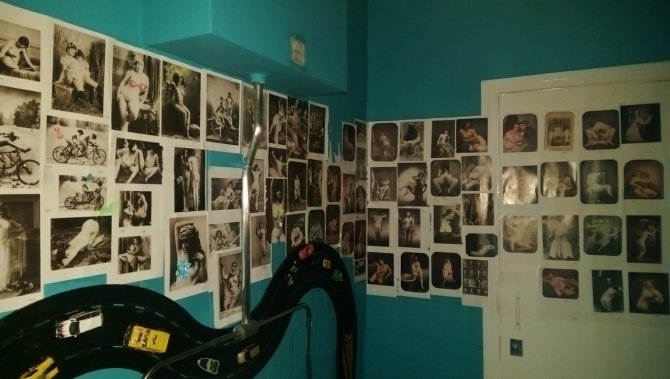 There’s even a little covered nook outside covered in cushions and games. 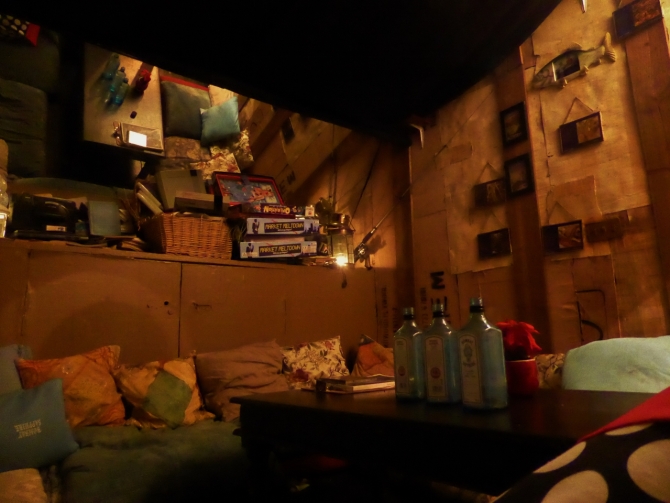 After some teacup cocktails (cuptails?) and a catch-up with fellow bloggers Angie (of luxury lifestyle blog Silverspoon London) and Rosie (of foodie blog A Little Lusciousness), we sat down to dinner. Now, I was not expecting great things from the kitchen, because TLYD is all about its cool house party concept. Which is okay. We can’t all be good at everything.

But actually, I was pleasantly surprised.

The feast – which, if you couldn’t guess, was Italian – carried so many flavours it was almost a tasting menu. I can’t fault anything, but my favourite dish was the mushroom and asparagus arancini with truffle and porcini mayo (not pictured, sadly, because I’m greedy fat fuck and scoffed the whole thing before taking a photograph).

The puddings were small and rich, and included a pine nut caramel tart and a doll-sized tiramisu. Yes, it will forever annoy me that someone look one of the little pistachio nubbins before I took its picture.

Finally, we had coffee and cigarettes!

(I’m not a smoker and even if I was I wouldn’t have been able to have it indoors, but it was a nice touch!)

Afterwards we stood up – a little unsteadily, as the wine had been flowing pretty freely – and headed back over to the bar. At this point the tables and chairs would have been put away to make more space, because after its Friday night dinner parties, TLYD becomes a full-blown bangin’ house party. (Tickets for the food slots must be booked in advance and cost £35, but for drinks you can just swing by any old time.)

Overall, it’s quite an experience, and one sure to score brownie points with mates and dates alike. I imagine the house party vibe is quashed slightly by having to pay for your drinks at the bar, and it’s a shame there’s no chance of a BYOB option, but hey, that Notting Hill rent isn’t going to pay itself.

More information – including menus and upcoming events – are available online. Keep an eye out for The Little Yellow Door at 68 Notting Hill Gate, W11 3HT.

« Authentic Russian R&R at Banya No.1 » Cabaret at Scarfes Bar will be the classiest Sunday evening you’ll ever have