Curious London is all about the best stuff to do in the (British) capital, but occasionally I do venture outside of Zone 2 and into the Wider World, which – amazingly – also has some pretty amazing shit to see and do. (And eat, obviously. Very important, eating.) I know, I know…who knew?

I recently came back from Sri Lanka with three of my closest friends, Maxine, James 2 and Dave, and had such a fantastic time I thought I’d share it here, even though it’s 5,500 miles away from London.

Getting to Sri Lanka itself was a bit of a dick because Maxine lives in Qatar, so we decided to get our connecting flight in Doha. This meant we had a five hour layover, which was spent guzzling bottomless hummous and G&Ts in the Oryx airport lounge, nullifying my six week pre-holiday diet in one foul swoop. (If you’re ever there…£25 for six hours. Bargain. Ask for booze ’cause they don’t exactly force it down you.) On the bright side, we had plenty of time to admire Hammad International’s famous art installation.

Once we landed in Sri Lanka, 19 hours after we’d left the house, it was dark, clammy and dicking it down. We piled into a van and drove a couple of hours to Kandy, the cultural capital of Sri Lanka and our new home for the next five nights.

Luckily, we were staying somewhere wonderful, and once we arrived the journey from hell was quickly forgotten. On holiday, I always love the luxury of a proper hotel, but hate staying at chains that offer no personality or real local flavour. I’d booked Clove Villa through Agoda, a seven bedroom boutique hotel only a £2 tuk-tuk ride from the heart of Kandy. 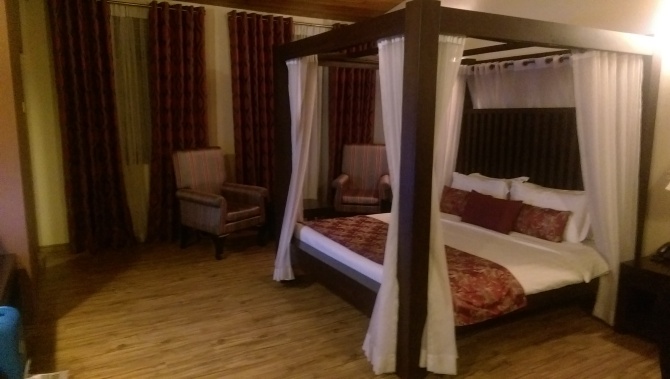 Tuk-tuks, by the way, are SO much fun, once you’ve gotten over the initial fear of dying in a fiery inferno. They’re effectively three-wheeled lawnmowers driven invariably by lunatics, who will cheerfully overtake buses on corners and plunge their tiny vehicles headlong into oncoming traffic with no apparent thought for the preservation of themselves, or, indeed, their shrieking cargo (i.e. us). 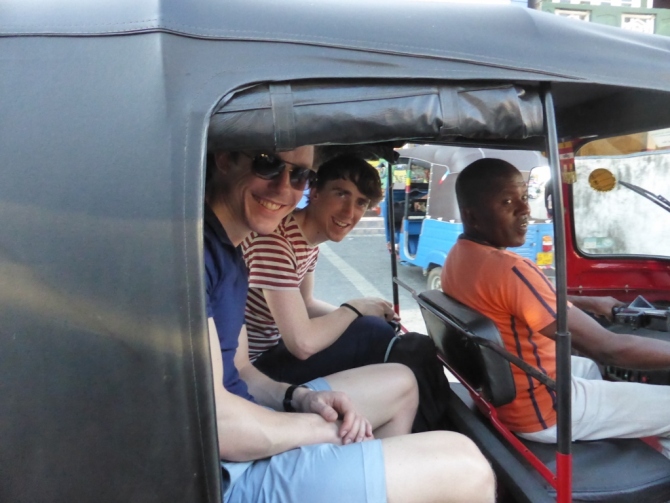 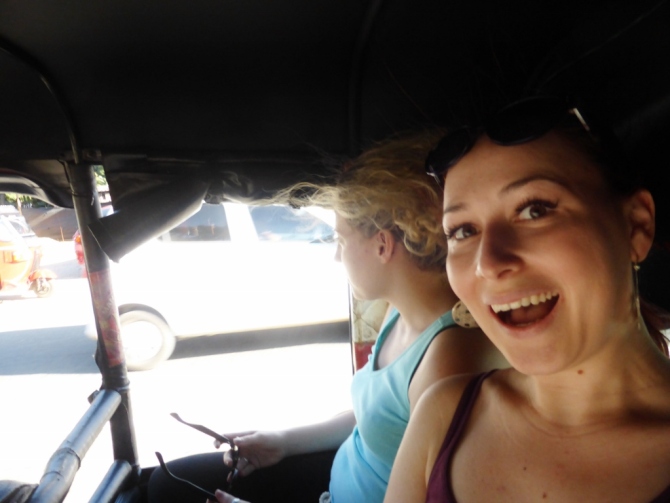 Driving around central Kandy was an experience in itself. The city is loud and hectic, the air humid and filled with drivers pipping their horns (in Sri Lanka, horns are used liberally not as a sign of aggression but to say, ‘I’m here!’) People and stray dogs, who seemed to cohabit fairly peacefully alongside the human population and had a pretty solid grasp of the traffic situation, swarmed the side of the roads. Cars, tuk-tuks and old-fashioned, ponderous buses snared up at junctions before pulling free in ones and twos. It was chaos. 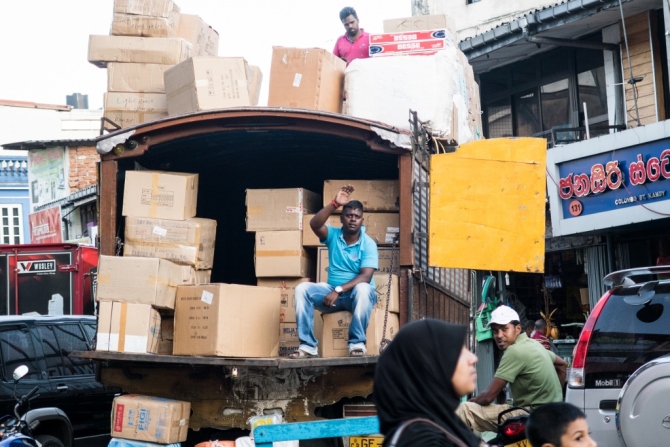 I first started to properly feel on holiday at the Peradeniya Royal Botanical Gardens, which were huge and beautiful and full of enormous fruit bats, which amazed us and absolutely nobody else.

The Gardens were teeming with schoolchildren in immaculate white shirts who goggled at us en masse, the braver ones approaching to shake hands and ask us ‘how do you do?’ while their schoolmates hung back and giggled. A crowd of schoolboys approached James 2 – pale, blonde, blue-eyed, keen on the gym – and chanted ‘Jackie Chan, Jackie Chan!’ at him.

The Gardens are known for their bamboo ‘forests’. Giant bamboo can grow up to 10cm a day.

Later that evening we found the Slightly Chilled rooftop bar, which although mostly full of fellow tourists, had a friendly, local atmosphere and delicious Sri Lankan/Chinese fusion food. Dinner and (copious) drinks came to less than a tenner a head.

And the view wasn’t bad either…

The next day we visited the Pinnawala Elephant Sanctuary, which rescues injured or orphaned elephants. Before we went, I was concerned about the welfare of the animals, but most of them spend each of their days roaming free. They keep a few around for people to interact with, and the littlest ones are fed from bottles.

Our best day was probably the one spent at Kitulgala, a couple of hours’ drive from Kandy. It’s known for its white water, and we were going to ride the rapids.

The valley is full of locals with sheds and dinghies offering boat trips, but we went for the less exciting (and potentially less deathly) option of using Borderlands, which I believe is the only accredited, fully-insured company in the area. It was significantly more expensive than the others – around £60 a head, including a half day adventure and lunch – but more than worth it. We saw the occasional other boat, but for the most part we were alone sailing through the jungle.

Our trip also included some canyoneering, which involves jumping and sliding down the rocks carved out by millions of years of rushing water. 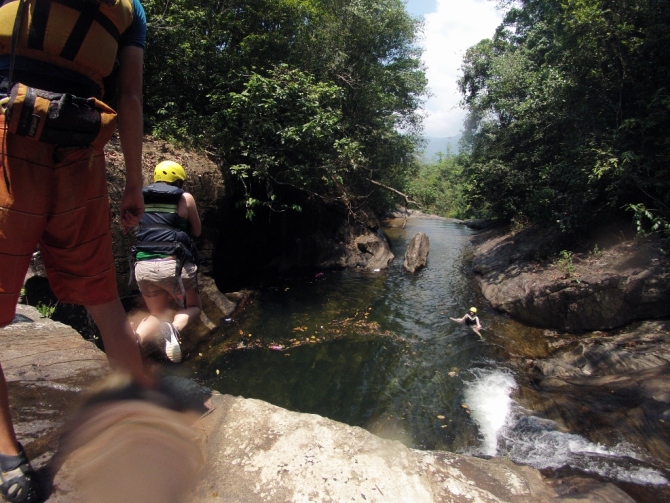 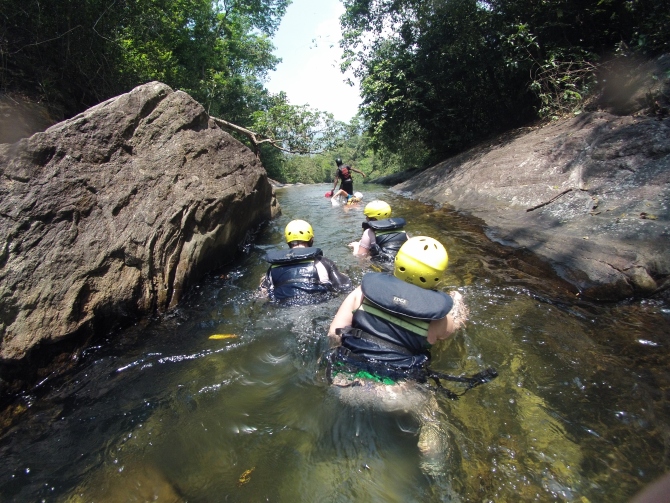 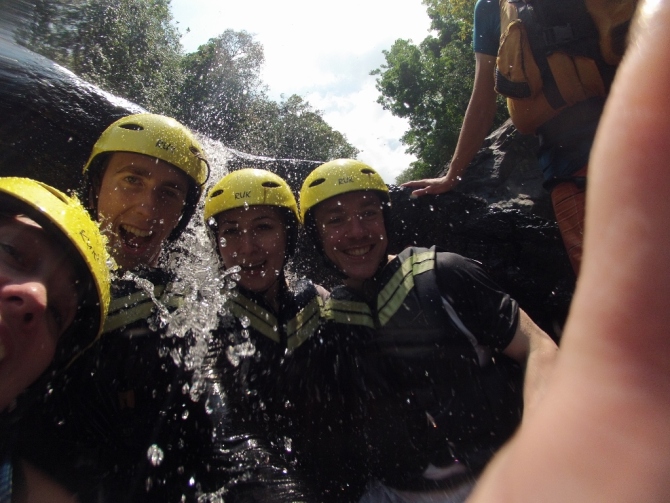 On our second-to-last day in Kandy, we got up very early to go to Sigiriya, an ancient rock that was once home to a huge fortress, and, before that, a Buddhist monastery from as early as 300 BC.

Sidenote: driving yourself is just not an option in Sri Lanka – even Maxine, who drives in Qatar, had never seen anything like it. The best option for longer distances is to get a driver. Ours was great, had a minibus and didn’t try and force us to go places we didn’t want to. (Many drivers have deals with local attractions and get kickbacks for delivering gullible tourists.)

There are 1,202 steps to the top, so it was especially important we got there early to avoid climbing them in the heat of the day.

On the way up, we saw some incredible, perfectly preserved cave paintings of busty women from centuries past. Legend has it the bloodthirsty King Kashyapa, who murdered his father and banished his brother to seize the throne, kept over a thousand wives at the fortress.

He clearly had a type…

It was still hot while we climbed the rock, but bearable. And the views at the top were spectacular. 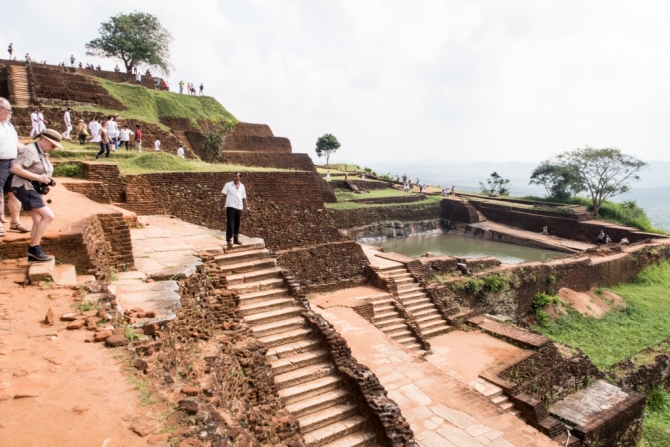 On the way back we stopped at the ancient Buddhist temple of Dambulla, which was filled with hundreds of Buddha statues up to 30 feet long. It was interesting to see – and quite surreal because there were just SO MANY Buddhas – but there wasn’t any information about the site. I know it’s still a functioning place of worship, but we would have enjoyed it much more if we’d better understood it. We had to go on the half-page Lonely Planet gave it in the guidebook.

It didn’t help that the temple was up another enormous hill, and climbing it in the heat of the afternoon gave me a proper grump.

At sunset on our last day, we visited the Temple of the Tooth, an important pilgrimage site for Buddhists and home, they say, to one of Buddha’s actual teeth.

It was chaotic inside, chock full of worshipers and tourists alike, and it was hard to know what was going on.

Our ears rang with the loud gongs calling the faithful to worship, and the air was perfumed with the fresh floral offerings that were laid out in their thousands. 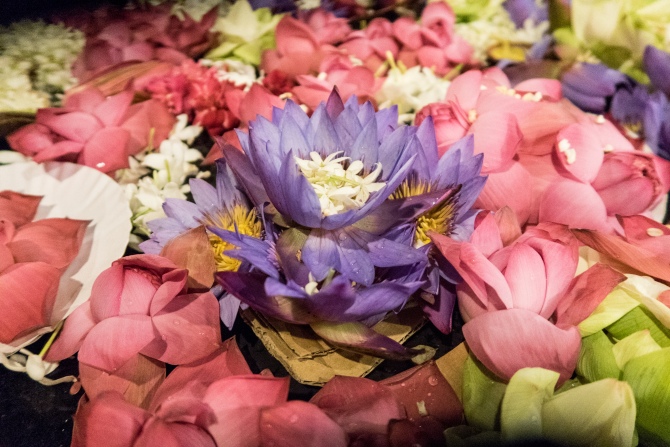 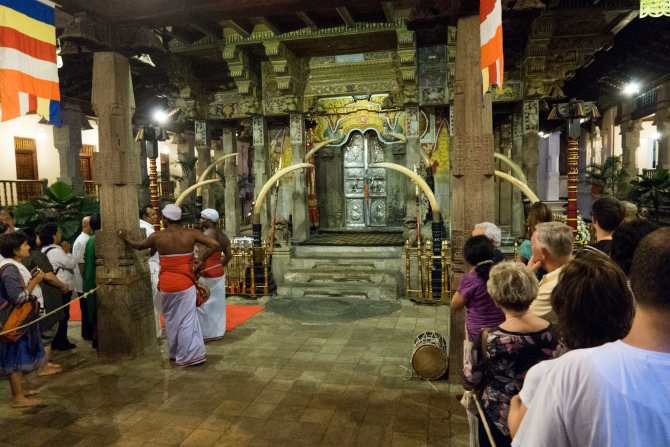 Maxine, who is about as spiritual as a verruca, was unimpressed by the chaos (“What a load of old shit!”), but the rest of us – strident atheists – found the architecture and atmosphere rather enchanting.

The next morning Mahinda picked us up for the last time for the long drive to Kumbuk River, where we were due to stay next…

« Kimchi muffins, Korean fried chicken & towers of beer at On the Bab Covent Garden » All the fun of the flesh-eaters at The Generation of Z