The PR team behind 20 Fenchurch Street has had a very bad time. The skyscraper was aggressively opposed from the outset on the (justifiable) grounds of intolerable ugliness, and then there was that unfortunate ‘Fryscraper’ incident. Since its completion, comparisons have been cruel and unflattering; it has been accused of impersonating everything from a Nokia 2100 to a sanitary towel, compared to an airport, and viciously slagged off by The Guardian‘s architecture critic.

And alas, it is very ugly: ‘the muffin-top of Monument’ as James 1 so eloquently put it as we headed inside for lunch. It towers freakishly over the nearby and relatively petite Gherkin, together the skyscraper equivalents of Kim and that other Kardashian that looks like a linebacker.

But the view is truly sensational, even on a grey day. 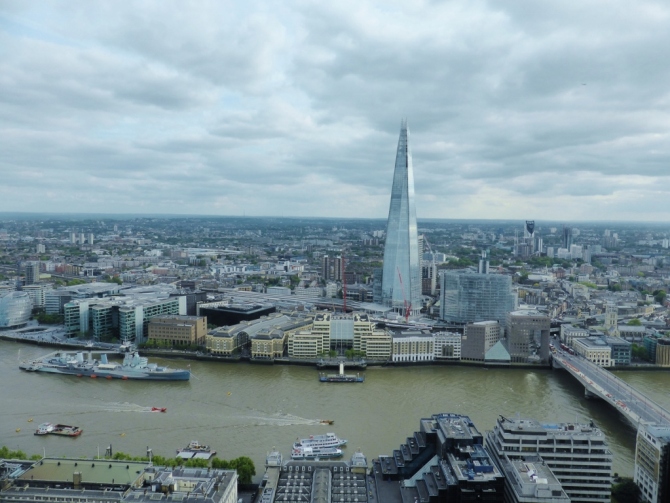 (The French writer Guy de Maupassant famously ate dinner every night at the Eiffel Tower, and when asked why replied: “It is the only place in Paris that you can’t see the Eiffel Tower.” Indeed, the same could be said for the poor old Walkie-Talkie.)

To be fair, it does look like an airport (but a nice one, more City than Luton), and with its charmless security checkpoint downstairs it certainly feels like an airport, but the overall feel is one of an optimistic post-apocalyptic world. You can imagine, one day, when humans have well and truly fucked planet Earth, the Sky Garden becoming the blueprint for the new great outdoors. It’s an interesting space for sure, and there’s nowhere else in town quite like it. There’s also a rather marvelous open-air platform that, I imagine, would be an incredible place to watch the sunset from on a summer’s evening.

At 3pm on a Sunday though there were no sunsets, and the Sky Garden was swarming with children, many of whom were using the architects’ smooth granite parapets as slides. It’s hardly surprising; London is a blisteringly expensive place for a family day out and entrance to the Sky Garden is free (though you can’t just roll up; spaces must be booked in advance). The cost to take a family of four up the Shard, by comparison, is nearly £100. It does mean that anyone looking for a relaxing and/or romantic meal needs to upgrade from the Sky Pod – a bar selling (very reasonable) cocktails and a smattering of sharing platters – to the Darwin Brasserie on 36 or the Fenchurch Seafood Bar & Grill on 37. 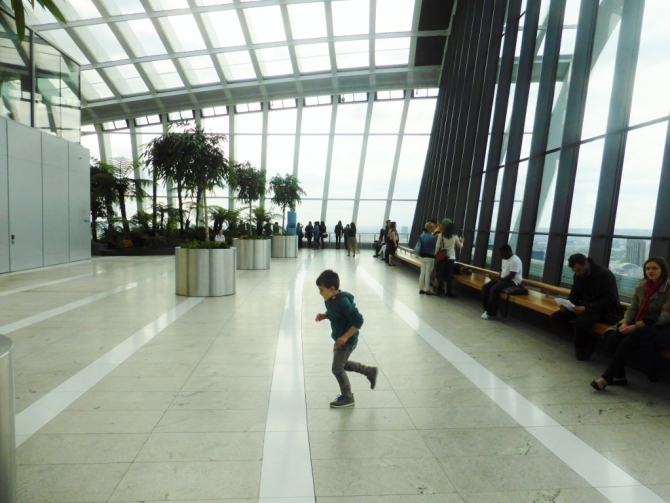 Fortunately we had a reservation at the brasserie, which on Sundays serves an extravagant brunch for £39 a head (or £19 for the halflings). I say brunch…it starts at 12pm and our reservation was at 3:30pm, but whatever, it’s all good. The array on offer was quite incredible; starters and desserts are served buffet-style, whereas mains are chosen from a menu and cooked to order. (You see? A three course brunch is not a thing. A three course brunch served after 12pm is a lunch. Come on, Darwin, there’s no shame in it.)

After a summery selection of what my mother would call ‘Salady Bits’ – fresh bread, asparagus, delicious cold meats and a splendid chorizo and potato salad – James 1 chose the beef rib, a huge, tender cut of meat served pink with buttery carrots, beans, spuds and a Yorkshire pudding large enough to be worn as a hat. 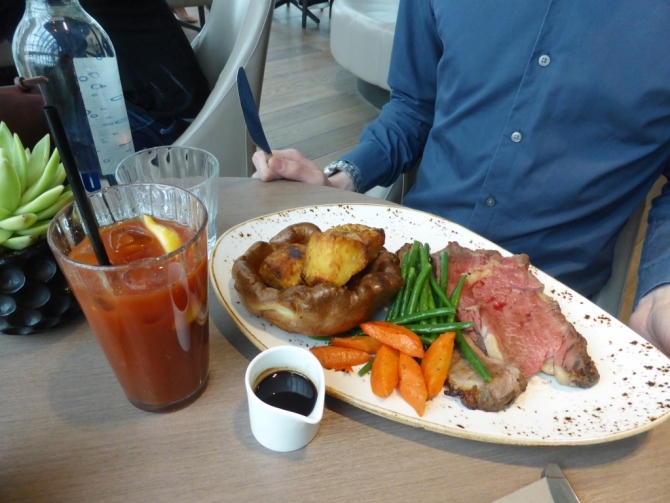 In the market for something lighter, I chose the lemon sole, which was perfectly cooked and satisfyingly lemony all the way through. It wasn’t filleted, but the fish slid cleanly off the spines with no effort at all, so don’t let that put you off if you’re funny about bones. 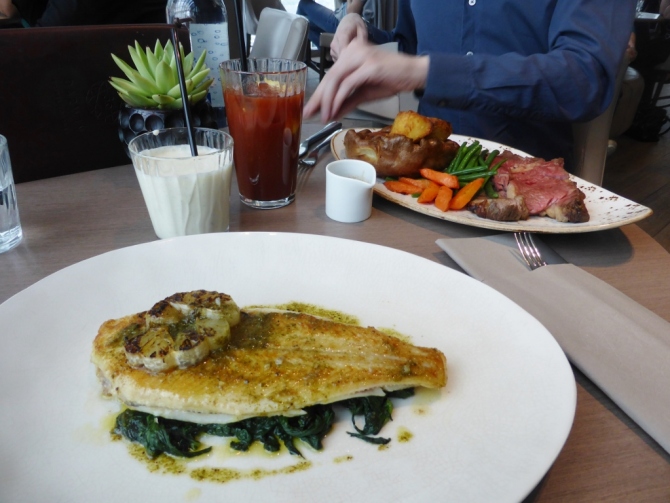 We were both feeling pleasantly full when we remembered there was a whole table of puddings to be attended to: cheesecakes, fresh doughnuts, waffles, Eton mess, crème brûlée, a cheeseboard and more. We couldn’t possibly sample it all, but the homemade chocolate and walnut tart was rich, gooey and good. The doughnuts were a nice option too: big, swollen balls of freshly fried dough, oozing with chocolate or jam. (Unsure of the correct etiquette when eating a doughnut for a sit-down meal, I ate mine with a knife and fork.) 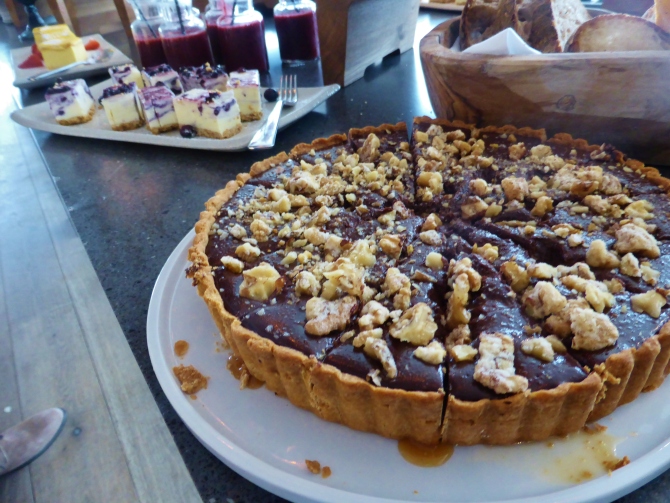 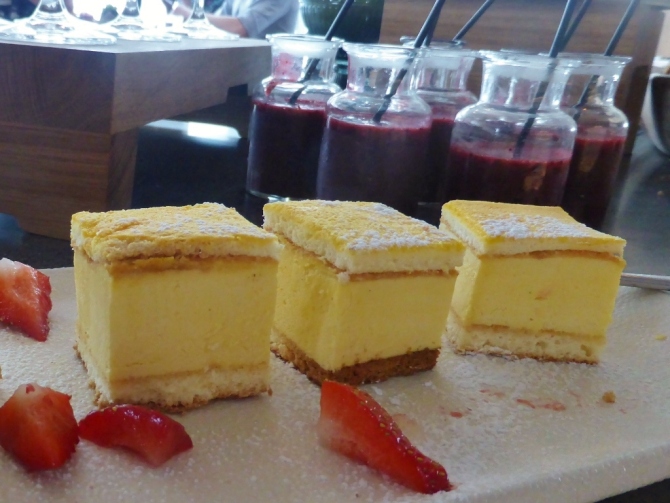 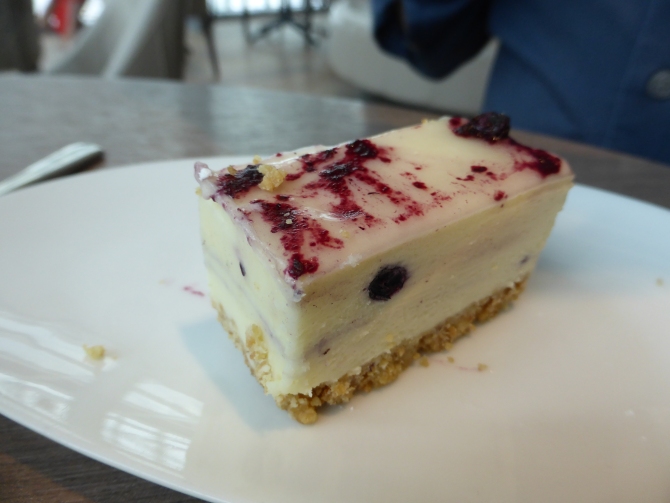 Yoghurt-style smoothies are included in the price – I liked the mixed berry, James 1 the vanilla bean – as was the Bloody Mary bar where you could assemble your own restorative tonic from a selection of (highly alcoholic) Bloody bases. 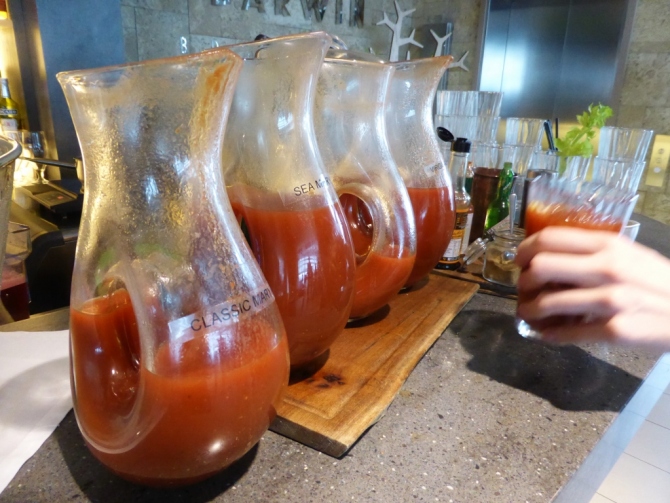 Value-wise, the Darwin Brasserie is very much in line from the city’s other hardcore brunches, and if you like beautiful views and Bloody Marys the deal is probably one of the best in town. For maximum value, I’d recommend going later in the afternoon so you’re hungry for one of the more impressive mains; the Eggs Benedict and full English breakfasts looked good, but I suspect you’ll get more bang for your buck with the more lunchy options, like the salt beef brisket, leg of lamb, beef rib or lemon sole. With the unlimited starters and desserts, we left feeling very, very full, but a little more kindly towards the building and its monstrous bulk. After all, it’s what’s inside that counts.

« Lose yourself in Maze Grill’s epic meat fridge » Michelin on a shoestring: dinner at Arbutus