It was much higher at the top of the platform than it had looked from the ground. The golden afternoon had seeped away and there was a bit of a wind picking up. In the distance, a phalanx of purple-grey clouds looked like they meant business. I’d just climbed up a very, very high ladder where a woman half my weight was dangling me over the edge of a tiny platform as I reached for the trapeze.

“READY,” yelled the girl below holding the rope that would, if I slipped, save me from plummeting into the, er, safety net. Which, obviously, is still quite scary, even if lacking in actual peril. I bent my knees, like I was supposed to. “HUP!” she screamed, and I hopped off. There was a surreal moment of hang time as my body swung in towards the bar, and then I was off. 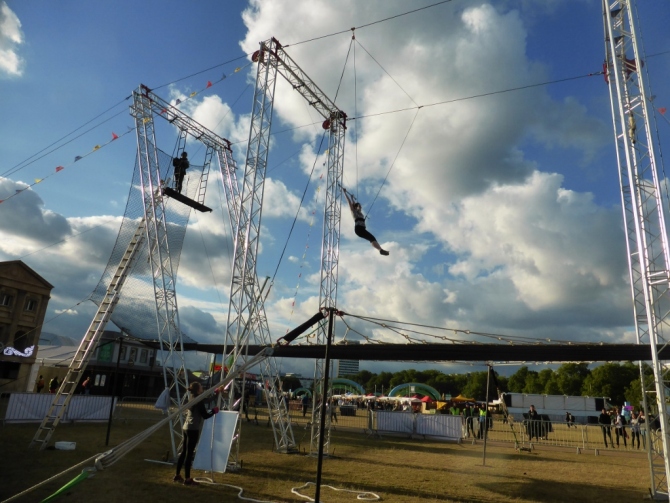 We were in Hyde Park with Gorilla Circus as part of Jeep’s #RenegadesWanted campaign, which is all about cheating fear and challenging yourself in new ways. There’s even a competition running with bitchin’ prizes like Parkour lessons and the Tough Mudder challenge, and you can enter for whichever experience most tickles your pickle here.

To conquer the flying trapeze, I’d brought along a merry troupe of fellow daredevils, each one a self-contained pillar of bad-assery. Sort of. I mean, there was a fair bit of threatening and sulking involved on my part, but they all came in the end.

Although, admittedly, their enthusiasm wobbled a bit when they saw just how bloody high the thing was.

Your start off on the ground practising the basic trick of hooking your knees over the bar and letting go. Don’t be disheartened by this bit – it takes some killer core muscles to manage this unaided on the ground (muscles, I might add, that I don’t have), but it’s much easier when momentum is pushing you upwards and over on the trapeze. 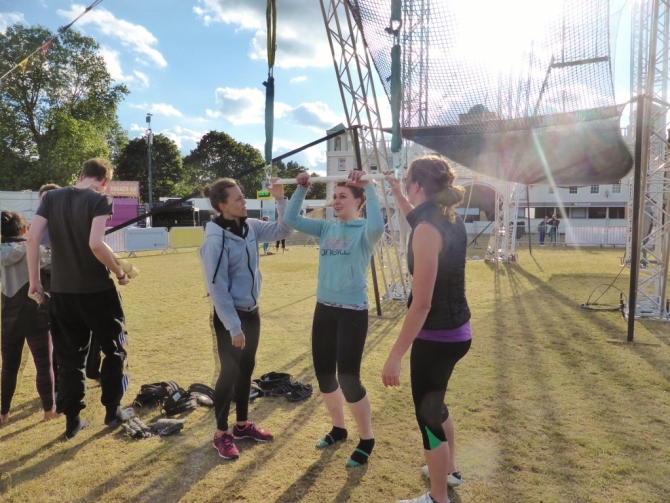 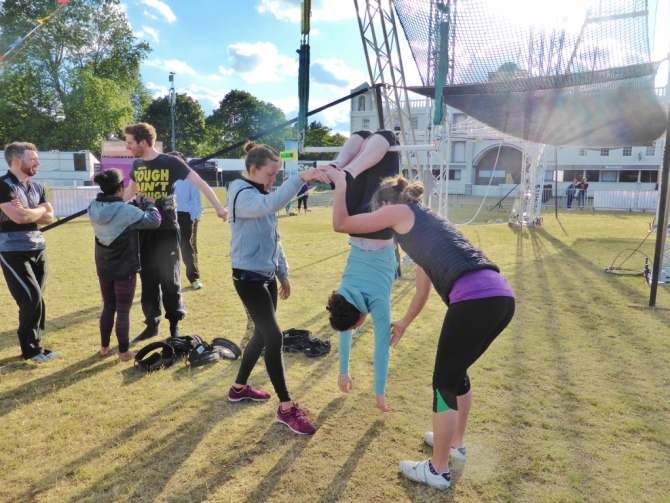 Annoyingly, the boys absolutely bossed it, even though they were the ones shitting the most bricks before we started. The knee-hang trick only really requires a good sense of timing (and the balls, of course, to jump off in the first place), but in my case it took a few goes to get right. 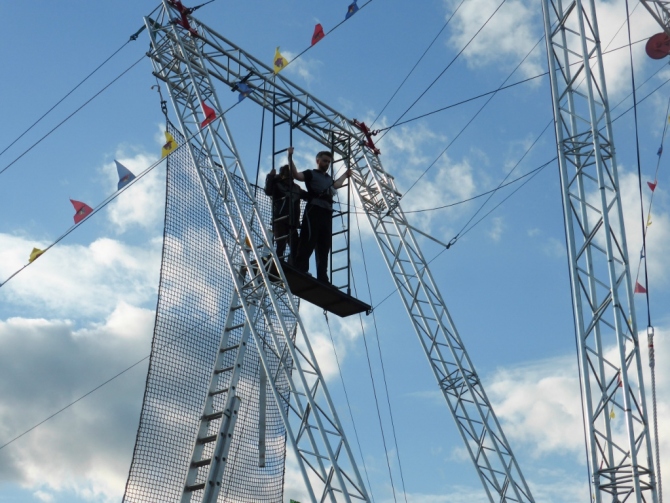 Andrew, who had foolishly arrived early and got his name written down first, was the first up the very tall, very wobbly ladder to the platform. He even managed to the do the back-flip at the end (which I never got the hang of, opting instead to drop face-first onto the net like a sack of wet cement). 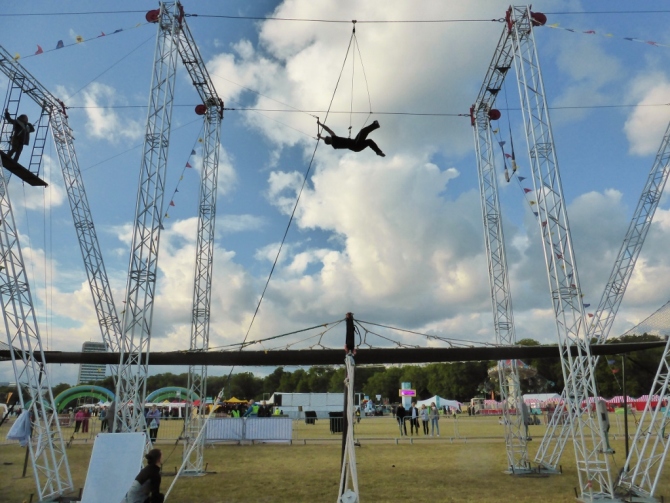 Even Mike, semi-professional beanpole and not good with heights, managed to wrap his limbs around the bar.

Which goes to show anyone can do it! (Except Carla, who freaked herself out a bit at the top and didn’t go up more than once, so maybe only almost anyone.) 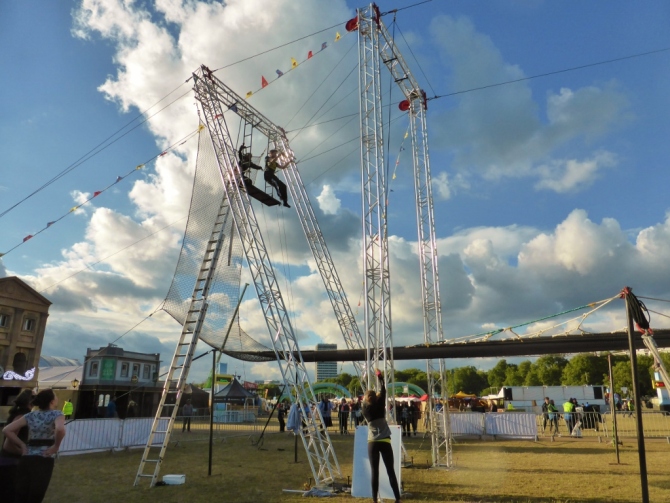 We all managed the knee-hang by the end, but the more advanced people in the class were turning some pretty epic tricks… 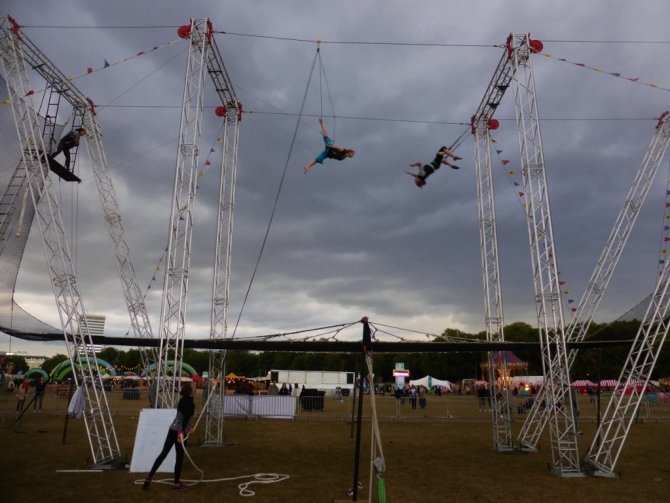 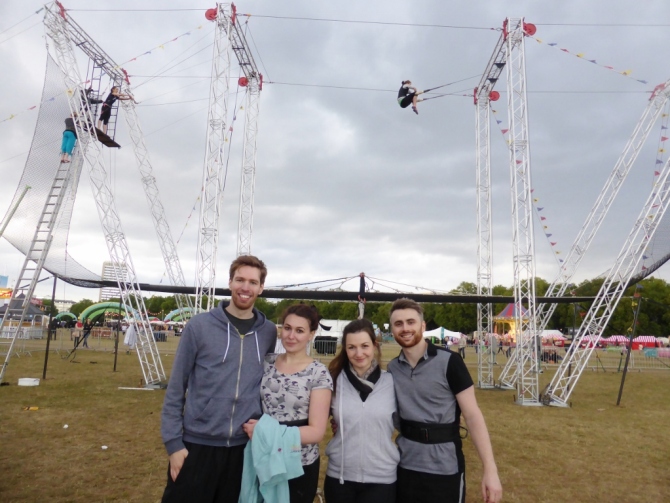 Gorilla Circus is finished in Hyde Park now, but has dates for its Regent’s Park rig all the way up until September. Wear your gym clothes and take plenty of moisturiser to soothe that afterburn in the pub later on – it’s pretty brutal on the hands. Prices start from £24pp for a single lesson, though they’re cheaper if you sign up for a four-week course. August slots go on sale on July 1st and sell out quickly, so if you’re interested, now is the time. Bookmark that booking page immediately!

Of course, if you doing fancy giving the trapeze a whirl, you could win the chance to do one of Jeep’s ten other adrenaline-pumping prizes with #RenegadesWanted. 🙂